Horses Past and Present

This page contains details of the horses I have had the priviledge of competing over the years, including the horses I am riding currently. 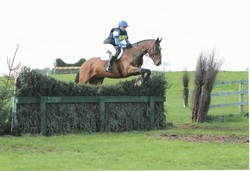 Woody was bought out of Ireland as a 3 year old and broken in by his owner and Carolyn Banner. He came 5th, jumping double clear in his only Intro outing as a 4 year old at Stafford. He was then turned away for the winter and had a quiet year in 2011 due to a lack of time and other commitments. He also spent the winter of 2011 turned away and I took on the ride in February 2012. We completed Stafford, Eland Lodge and Kelsall BE90's well, with a double clear and placing at the latter. However, after numerous cancellations due to the weather it was decided that he should spend the summer doing Working Hunters with Caz before possibly hunting with Phil. 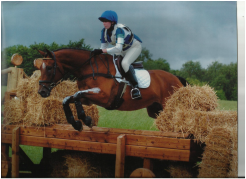 I looked after and competed Onky on behalf of Terri while she was out of the country for a year. Onky is as tough as old boots! He came to me when he was 20 years old with plenty of life experience having travelled half way around the world. Terri produced him while she was still living in America and brought him over with her when she moved to the UK. He previously evented up to Intermediate level. Onky and I completed 2 events together at Marchington and Somerford but our season was a bit hit and miss due to Onky suffereing a few issues with his feet. Onky sadly passed away at 30 years old in 2014.
To view a video of Onky and I eventing, click here. 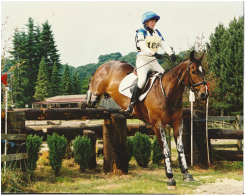 I bought Badger in the spring of 2003 out of a hunting home. He had also done a few Pre-Novice's with mixed results. Badger was a very talented horse but being quite long in the back he found it hard to engage and therefore struggled with the SJ phase. However, after working really hard on his weakness we were getting somewhere and we finally got our first placing at Pre-Novice level with a 5th place at Aske Hall. Unfortunately (and slightly ironically) Badger sustained an injury on the XC at this event which was to end his eventing career. He was re-homed to a lovely lady in 2005 where he enjoyed a fabulous retirement as a lawn mower and occasional happy hacker. Sadly, Badger was put to sleep in December 2012 aged 18, after an episode of colic. 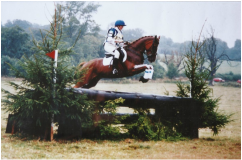 Queenie was the first horse that I evented at BE level. I bought her from a dealer as a very green 4 year old - I was also very green at the time being only about 14 years old! She was a very sharp, buzzy mare and I was often told that she was a 'professionals horse'. She had an amazing amount of scope but had a somewhat unconventional technique over a fence, to say the least! After a few unaffiliated one day events we completed a few BE events together including jumping clear around Osbaldeston and Tetton Hall Pre Novice's, which was the lowest level of BE in those days. Later the same season she went on loan as I went off to work as a groom for a professional event rider and was unable to take her with me. She was later sold to Guernsey as a show jumper where she has had much success.